An Inn steeped in history!

The Rebecca Riots were a series of attacks on toll gates throughout South Wales. They were in protest against the Turnpike Trust’s excessive charges to use the roads. The rioters were often disguised as women and their leader was called Rebecca.The name Rebecca for the leader of the rioters and daughters for the followers came from a biblical text: Genesis 24 verse 60, “And they blessed Rebekah and said to her, Our sister, may you become thousands of ten thousands, and may your offspring possess the gate of those who hate him!”In the C17th and before, Gower Roads, even the main Carmarthen to Swansea and the old Loughor to Neath roads were little more than dirt tracks or mud baths depending on the weather. There were no local Councils responsible for roads but there were a number of local trusts set up to improve and manage the roads and in return the Trusts were able to charge people a toll to use the roads. The tolls were collected at the toll gate. The toll collector was provided with a house so he or she could collect tolls from anyone passing whatever the time of day or night. 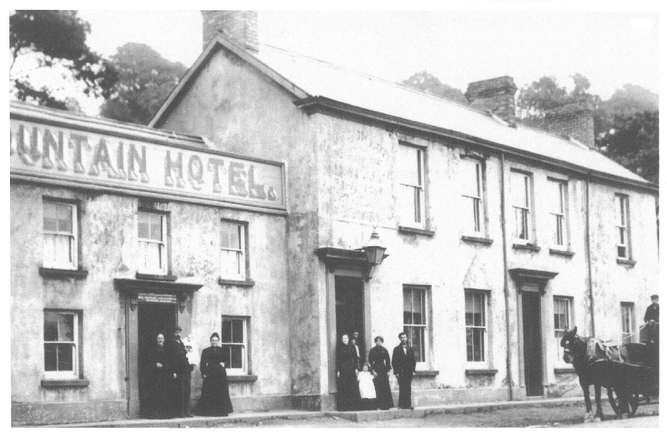 In this area, many of the local tenant farmers took their surplus produce to Swansea Market and had to travel to collect their provisions, such as lime, to put on the fields. Each time they passed through a toll gate with their horse and cart they had to pay as much as 6d, (6 old pennies or 2.5p in current money) to pass through a gate, which meant a cost of one shilling (5p) for every return journey. It could cost as much as five shillings (25p) in tolls to move a cart of lime eight miles from the coast to the farm.

Five shillings was a lot of money, John Rees in 1839 was a farm labourer at Llys Nini, his weekly wage would have been only 10 shillings (50p). People were therefore very upset about the charges, especially as they also had to cope with food shortages after wet summers and poor harvests in 1839, 1840 and 1841. The toll charges added to local people’s worries in a climate of social change and unrest.

Rebecca Rioters attacked the Bolgoed Gate on the Swansea Road, on July 6th 1843. This Gate was opposite the Fountain Inn at Bolgoed Road, Pontarddulais; a stone on the road now commemorates the spot. The gate spanned the main road in front of the inn; while a smaller bar blocked the Goppa Road at the side of the building. The attack was planned in the Fountain Inn, the leader or Rebecca was Daniel Lewis, a local weaver, who lived with his parents in a cottage beside Goppa Chapel. At around midnight about two hundred or so men, wearing women’s clothes and caps and bonnets, destroyed the gate. They moved the toll gate keeper’s furniture out of his house before pulling the building down.Daniel Lewis and 3 other men were caught; David Jones, a farmer’s son from Tŷ Mawr Farm and previously from Cwrt Y Carnau, William Morgan, a farmer and the keeper of the Red Lion Inn in Pontarddulais, Griffith Vaughan. A local man John Jones informed on them, but his evidence was not believed. 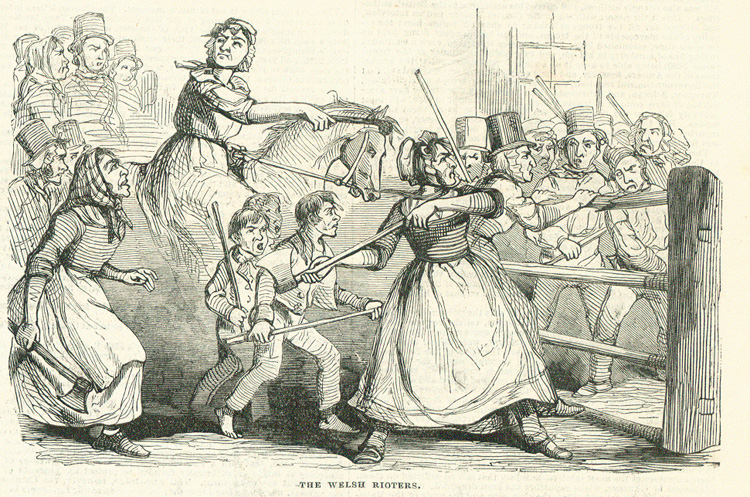 Daniel Lewis was a well known local man, he was a poet using the bardic name of Petrys Bach, who had a ‘happy-go-lucky’ disposition and enjoyed having a drink at The Fountain Inn. He had won the heart of Elizabeth Davies of Ystomenlle Farm, Hendy, the eldest daughter of Richard Davies, but had not won the approval of her father who was determined that she would marry a farmer. Elizabeth was as equally determined to marry no one but Daniel; she was a very headstrong woman and managed to wheedle the plan of the raid on the Bolgoed Gate from Daniel on the night.  Accompanied by her maidservant, she stealthily made her way through Pontarddulais to The Fountain Inn, and watched the whole attack from an upstairs window. John Jones, a local labourer was jealous of Lewis, which may have been the reason that Jones informed on him.  Daniel and Elizabeth Lewis are buried in Goppa Chapel cemetery.

Imagine how many tales The Fountain Inn could tell. Hundreds of years of history in the making – although as far as we are aware the only spirits we have at the Fountain are the drinkable ones!

Booking a table is required to avoid disappointment on arrival and to give our customers a better experience.